Defining Sharpen’s release and feature priorities is not going to be an easy task. That fact was clear to me from the very first day I started working on Sharpen. In this early stage of the project literally every feature is equally needed and equally important:

And these are just a few of the major development directions.

Luckily, in this very early stage of the project I can simplify the prioritization process. At the moment I primarily focus on those features that will help make my talk on Losing Weight With C# 7+ as practical and tangible as possible. And thus, the release 0.2.0, following my talk, fully focus on adding analyzers for C# 7.1 default expressions.

So, Sharpen v0.2.0 is there, available for download on the Visual Studio Marketplace :-)

These are in practice the three most prominent places where the default values are used.

As always I was curious of the findings in the real-life code. And for sure (this time without a surprise) there were many findings worth showcasing. Just to give you a glimpse of the new feature, here are the default expression related findings in the NHibernate code: 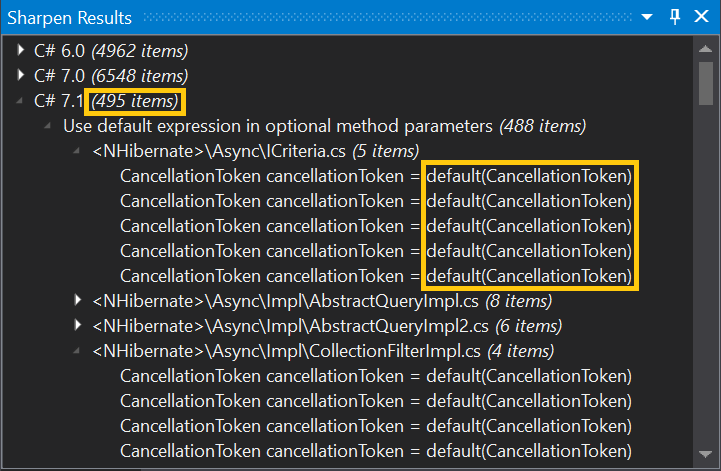 Here is on of the interesting findings. Async methods in NHibernate follow the usual pattern of accepting an optional CancellationToken parameter. And since the CancellationToken is a struct, the only way to provide the default value, prior to C# 7.1, was to write default(CancellationToken). With C# 7.1 this simply narrows down to default. I would personally love to see NHibernate’s code loosing a bit of weight in this area :-)

This is just one of several interesting findings related to default expressions. I plan to share generally interesting Sharpen findings via a series of blog posts called “Sharpen Weekly”. Stay tuned ;-)

You can see the official release notes for the version 0.2.0 on GitHub.

Download Sharpen v0.2.0 from the Visual Studio Marketplace and give it a try on your own. I’m curious how interesting your findings will be :-)