As the title says, Sharpen ended its (unplanned) 2017 World Tour :-) The tour wasn’t only about traveling. It helped Sharpen to evolve and fortify its vision. And as such, it is worth recalling.

The journey started in Graz, Austria. It was end of October 2017. I was supposed to give my talk on Losing Weight With C# 7+ in the local Microsoft Developer User Group Graz. I did what-is-new-in-C# talks many times before, but this time I wanted it to be different. Simplified, artificial code samples used to introduce new C# features are typical for what-is-new kind of talks. I always found using only such samples to be inadequate and inefficient. Also, out of my experience, developers wasn’t starting to use new C# features after the talk. On the contrary.

My search, worth writing a blog post at least, ended in vain. And that was the moment Sharpen was born.

The very first version used in a public talk was written over the weekend just before the talk. For the record, here is how the Sharpen Result window looked at the time: 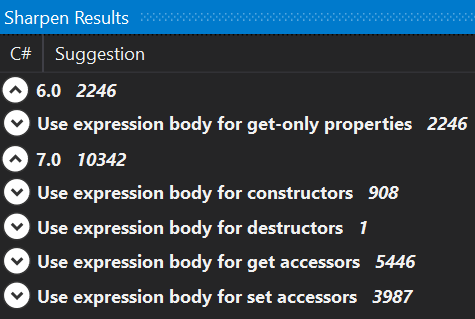 As you can see I didn’t have enough time to implement even a simple tree view.

Roughly a month after, in Microsoft Developer User Group Zagreb, Croatia Sharpen was already in a better shape.

the first public demo of #sharpen at Microsoft Developer User Group Zagreb@DomagojPa @to_pe thanks for having me as a guest! pic.twitter.com/TCCBPfjJkB

The version used in the talk in Zagreb is effectively the same embarrassing version 0.1.0 published on the Visual Studio Marketplace two days after the talk.

A week after I was supposed to give my talk on Roslyn at the local Microsoft Developer User Group in New Delhi, India:

Sharpen was presented as one of the two examples of applications developed using Roslyn:

proudly presenting #sharpen at #learnroslyn #meetup in New Delhi
feels like being on the #sharpen World Tour 😀#roslyn #iloveindia pic.twitter.com/mrRl9WXBL1

Due to the busy business trip, there was no chance to enhance Sharpen between Zagreb and New Delhi. But even the embarrassing version 0.1.0 was enough to sparkle interesting and inspiring discussions.

After returning from India, I had a chance to give my talk on Losing Weight With C# 7+ at Karlovac Developers Meetup in Karlovac, Croatia and Microsoft Developer User Group Rijeka, Croatia.

This time, the version used in the talk was the freshly released (just few hours before the talk :-)) version 0.2.0:

happily announcing that #sharpen v0.2.0 just got available on VS Marketplace 😀https://t.co/GRTaD8AKCd
check its new suggestions for #csharp 7.1 default expressions@seriesOne so far everything according to the plan 😉 pic.twitter.com/uocESp7Tg3

It’s not About the Traveling

Being invited to give a talk is always an honor. Having opportunity to travel is always a joy :-) But neither of these two motivate me as much as the valuable discussions with fellow developers that happened during this “World Tour”. Each time different, each time inspiring, these discussions helped me to better shape my own views on C# and its features. They helped me as well to better define the Sharpen’s vision. Out of the feedbacks I got, the talks and discussions helped participant as well to learn more about C# and Roslyn.

That’s the reason I enjoy so much combining knowledge sharing and traveling. If you would like me to give a talk on C# or Roslyn at your local developer group or a conference, feel free to contact me via Twitter or on my email (ironcev at hotmail dot com). The farer you are from my place of residence, the better :-)

It’s not about the traveling. But still, it looks to me that traveling and Sharpen will remain deeply interwoven ;-) The version 0.2.0 was mostly written in the bus, while traveling from Austria to Croatia and through Croatia. And the upcoming version 0.3.0 got its first functional incarnation on the plane from Paris to Guadeloupe :-)

Here they are, Sharpen’s C# 7.0 out variables suggestions in action, giving first valuable results somewhere high over the Atlantic Ocean :-)